In December we held our Annual Christmas lunch followed by the Presentation of Trophies to winners of the 2021 Club competitions. We did not run all of our competitions in 2021, mainly through Covid restrictions. However, here's a selection of photos of some of the winners holding on to their trophies.... 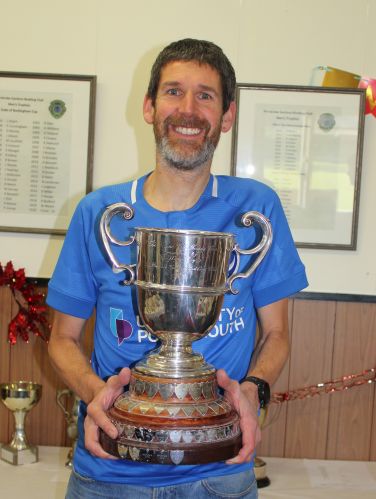 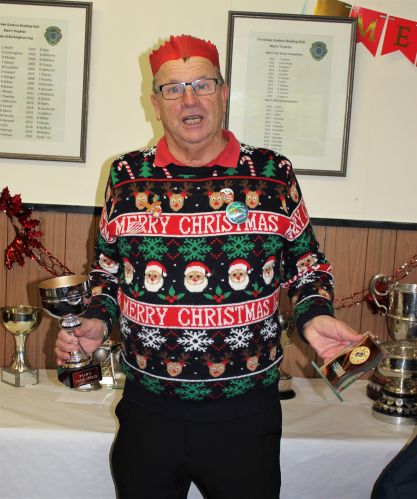 Dusty Miller, who received a special award for

As you will see below, our Club has been providing mainly financial support to a local "hands on" charity supporting veterans from all branches of the Services. The charity is called Forgotten Veterans and is housed in Fort Cumberland in Southsea. BUT - following an open-ended invitation to visit the Club and "have a go" at bowling, 24 veterans came along on Saturday 23 October. After some quick thinking it was decided to take the game outdoors and play on the green rather than squeeze into the Clubhouse for short mat.

A great time was had by all. Jill and Molly had been busy baking so there was time for tea and cake at half time and, as the pictures show, all of our visitors had a go at lawn bowling! 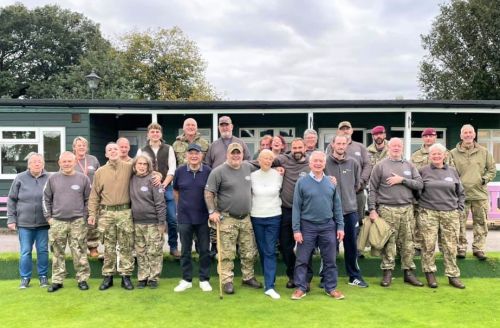 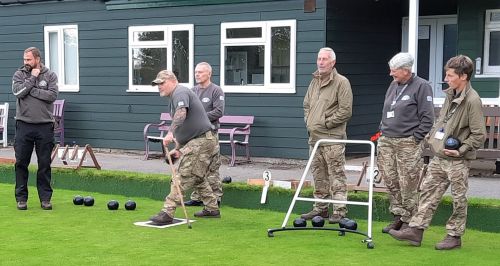 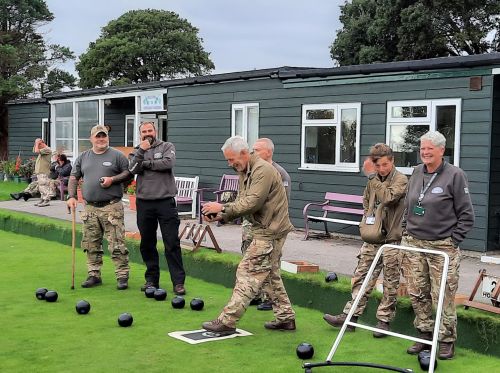 The Club continued its charity support for Forgotten Veterans that provides support in so many ways for former servicemen and women who need help. That may be emotional support, financial help, someone to listen or simple comradeship at regular "camp outs". The charity is based and homed in Fort Cumberland, a Grade 2 Listed building and run by talented and enthusiastic volunteers. Our President Carol took two full collection boxes to the Fort and handed them over to Gary who heads up this wonderful charity. 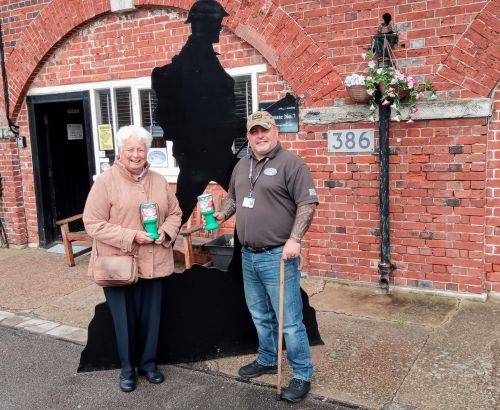 28 bowlers took to the green on a pleasant balmy evening for our end of season Candlelight bowls session. We bowled until 8 pm when the fish and chips supper arrived and it all added up to a very pleasant, fun evening of bowls. Thanks to Dusty Miller who organised the event again this year. No candles, we've gone a bit more high tech! 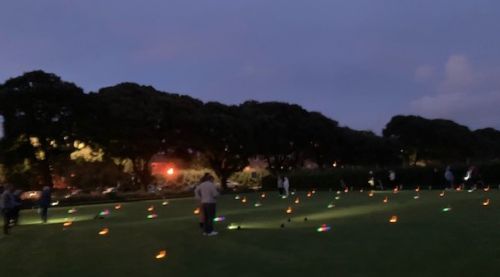 Fond farewell to a true gentleman

This week, several members said a fond farewell to a much liked member Mike Smith. Around 20 Pembroke Gardens members were joined at The Oaks Crematorium by members of the Portsmouth Royal Dockyard Historical Trust, where Mike was a regular volunteer, and serving and retired officers and men of the Royal Navy. Mike served in the Royal Navy from 1959 to 1994 and survived the sinking of HMS Sheffield in the Falklands War. At Pembroke Gardens Mike was an enthusiastic bowler and was also prepared to get stuck in and help out, most recently to implement our Covid-safe operating environment. His motto was "Keep it simple - make it happen". 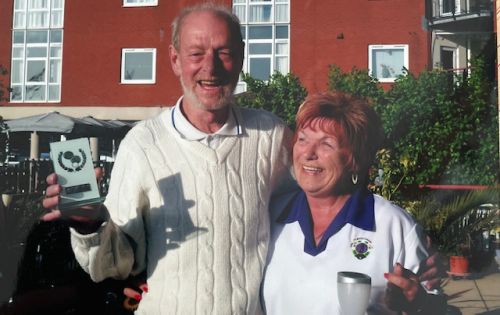 On Monday 13 September we played the Bowls Devon Tourists on their first game here in Hampshire and it was a pleasure to welcome them. The game featured 6 rinks of mixed players and was played in pleasant weather and even the sun shone after tea! Pembroke President Carol Reynolds and Bowls Devon Ladies President Christine Marshall exchange pennants after the game. 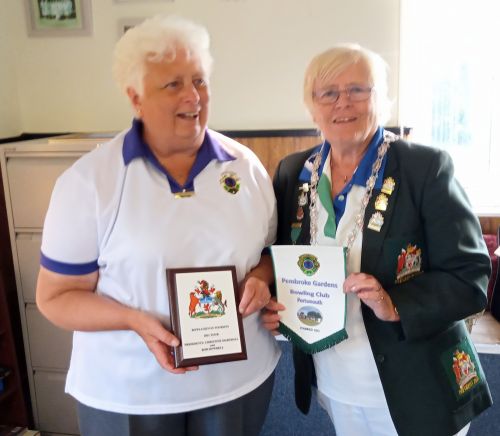 Our men's Club Champion this year is David Brookes so he went forward to compete in the Portsmouth and District Champion of Champions competition held at Leigh Park Bowls Club where David made his way to the final. His opponent was Roy Carter from College Park Bowling Club. Both players were in fine form and the match was closely followed by a small band of spectators. David started well and quickly reached double figures but Roy then won several ends to get within 2 points but David rallied for a strong finish and ended with a convincing lead. Simon Batcheler P&D Competition Secretary was on hand to oversee the event and present the trophy. Players and officers paid tribute to the excellent facilities made available by Leigh Park Bowls Club. 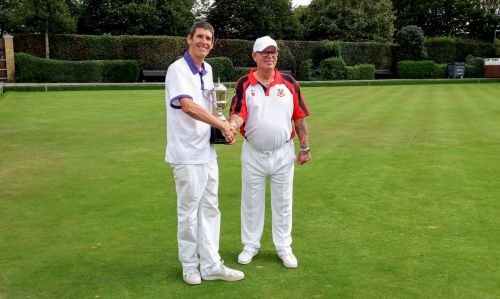 Sunday 25 July was President's Day, just one day after our Men's Two Wood Competition. The weather was not kind to us this year and we only managed 6 ends of bowls before the rain came down. However we did get a "spider" played first as this event is all about fund raising for the President's Charity. President Carol Reynolds wanted to continue the Club's support for Forgotten Veterans this year.

After our 6 ends of bowling the rain arrived in force but by then Jill Taylor and Margaret Rees had got the buffet onto the tables, the bar was open and a very good meal was enjoyed by 50 Members and guests. This was our first "large gathering" since Covid 19 had such a huge impact on our Club activities through 2020 and 2021. Presentations were made to four long-serving officers who are not standing for office next year. They are Jack Chernin, John Thurston Les Maddock and Trevor Watkins.

It was a real joy to have so many members present, all eager to catch up with news and simply chat to one another. Here are a few pictures:- 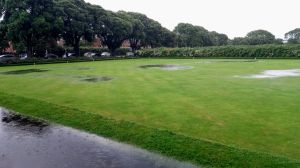 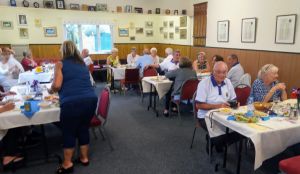 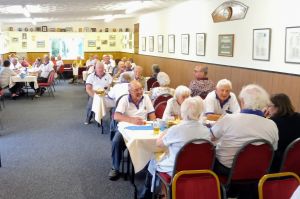 On Saturday 24 July we played our Men's Two Wood Competition, run by Bob Smith with two groups of 4 teams playing in a mini-league, leading to two semi-finals and a final. In the semis Former winners David Brookes and Trevor Watkins were knocked out by Richard Miller and Dusty Miller - NO they are not related! In the Final, which produced some really good bowling Dusty Miller beat Richard. If you scroll down you will see that Dusty and his team won the Charlie Macey Trophy earlier in the month. This man is having a tremendous season! Well done Dusty. 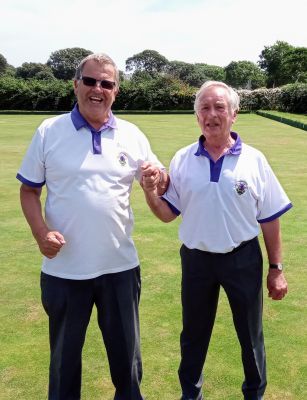 On Saturday 17 July we ran our internal Club Competition for the Charlie Macey Trophy. Now in its third year it is one of the competitions we have been able to keep going through the Covid-restricted summers of 2020 and 2021. We had 8 teams of mixed, drawn triples. All took part in 3 preliminary rounds before the lunch break and the leaders then competed in two semi-finals before the grand final. All played in very warm warm sunshine so the gazebo was very popular for the break. Here are a few photos. 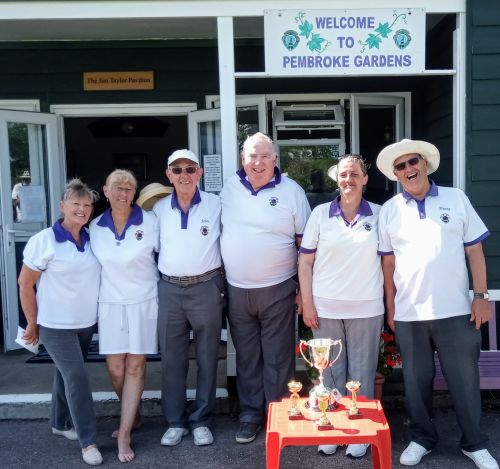 Here are the finalists. On the left are Elaine, Jill and John the runners up and on the right are Sam, Caroline and Dusty who collected the Trophy. 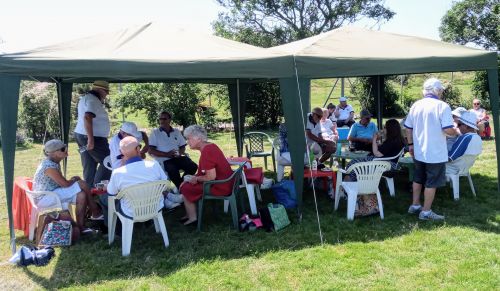 And here we are enjoying a BYO picnic lunch. The bar was open, there was a great raffle and some home-baked cakes. 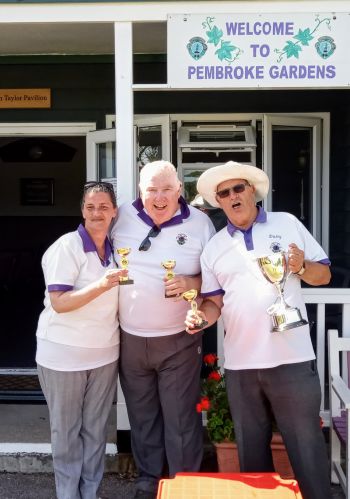 And here they are again - Caroline, Sam and Dusty